From 2008-2013, I became a senior Artist and Art Directors Assistant, Billings Productions, aka The Dinosaur Company & The Giant Bug Company.  I started out as a painter and moved up through positions over the years to become, at different times, Painting Lead, Sculptor and Mold-Maker, Exhibition Installation and Maintenance Specialist, Computer/Animatronic Electronics Research and Designer http://billingsproductions.com

Everything was produced in house, and I became fluent with the entire production process, and am very familiar with a wide range of animatronics processes, sculpting, mold making, casting, feather and hair application, welding, airbrushing, production design, exhibit installation, exhibit maintenance,  and more.  Whatever was needed to get the job done, I was able to do.  When I wasn’t creating new works in the shop, I traveled the U.S. doing on-site installation and maintenance.  The work volume was high, which required lots of discipline to produce the number of works expected.  I honestly prefer being able to dedicate a longer amount of time to a project in
order to produce a more refined aesthetic, but it has consistently proven beneficial to know how to produce large amounts of work quickly.

This is a video demo of my production work, which was submitted for the 2013 Flight School Fellowship in Pittsburgh, PA

In 2011 we constructed the world’s first animatronic fully feathered dinosaur that was built to be suitable for outdoor exhibitions.  We teamed up with a paleontologist to determine the best representation of the creature based off of its known
living conditions and survival traits. 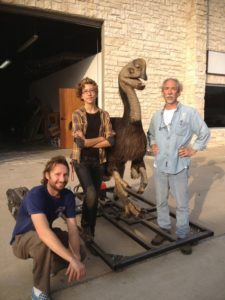 Citipati on display at Lowry Park Zoo in Tampa, FL Here’s a photo of a T-Rex I had painted in just 2 solid days of work.  I would have preferred to have an extra day or two to add more detail, but the fact that this was able to be achieved in such a short amount of time was an accomplishment to me.

In addition to creating life-size dinosaurs, we also created larger than life insects for outdoor exhibitions. This was a Madagascan Sunset Moth that I directed the fabrication for, and fully painted and applied all surface treatments.

Since the creature was being created about 50x larger than it actually was, I had to look at the wing under magnification to know what surface texture I needed to recreate.  After researching that the wings were actually made up of tiny ‘scales’, I located a thick fiberglass weave that represented approximately the same density as the scale size of the wing itself based off of the enlarged proportions and applied all surface treatments on top of that textured fiberglass base.  The surface treatment
involved working with drybrush techniques to enhance the textured weave of the fiberglass, iridescent mica powders, flock lining, and various artificial furs. Process shot of painting the wings. Detail of the completed wings to show their luminosity. This was the steel armature for the giant Mexican Red Knee Tarantula.  This was the old method we used for building armatures in the shop.  They now use a CNC mill to carve out the bulk of the sculpture out of styrofoam and sculpt the final details
in heat soluble clay.

This was a celebration snapshot of the freshly completed Mexican Red-knee Tarantula.  I was in charge of the fabric/material application and painting.  We had less than one week to apply all of the fur and fibers and paint the creature.  For the legs/facial hairs, I used different gauges of nylon fibers.  This photo was taken shortly after midnight when the creature was finally finished.  The victory pose was well earned.  This was a work in progress shot for a giant grasshopper we created for one of the insect exhibits. We had to figure out how to replicate the enlarged compound eye structure, and I came up with the idea of using a honeycomb jersey mesh and melting a thin layer of heat soluble clay over the surface so that the mesh would leave an impression when it
was peeled away from the clay surface.

Heres a few other examples of some of the insects we created. Goliath beetle armature is larger than a car! Giant Scorpion being prepped for painting.